The latest installment of our weekly debate podcast, Geekly Debate. This week we debate the Second Most Iconic Mortal Kombat Character (because we all agree on the first)!

Let us know what you think about the show, and send in your ideas for what we should debate next.

We continue with our series of Spider-Man lists and posts leading up to the Amazing Spider-Man 2 film, and this time we tackle the villains that loved to tackle Spidey. And, boy, are there a ton of villains to choose from! There’s two obvious way to approach this list: The easy way, and the hard way. From my very first entry in this Lot, you can tell I’m going the hard way. So, without further ado, we shake a sinister fist, have heard just about enough wisecracks, and start to think about committing crimes in Cleveland instead of New York, as we run down our slanted and biased list in Top o’ the Lot: Spider-Man’s Villains.

Yeah, this list becomes a bit tougher to get through when you immediately take the Top Six off the board

from the start. But it had to be done! There are far too many really cool Spidey villains to leave any of these guys off the list, and, thankfully, Marvel wrapped them all up in a nice little package in 1964’s Amazing Spider-Man Annual #1. If they could do it with the good guys, why not the bad guys? And the Sinister Six was the Marvel’s villainous version of the Avengers. The team was led by Doc Ock, and with Electro, Kraven, Mysterio, Sandman, and Vulture all teaming up against the Web-slinger, but Spider-Man ended up winning at the end…again. There may have been other versions of the team, but nothing beats the original, and the lineup is about as classic Spidey villain as you can get.

Former Private Investigator turned guinea pig, Mac Gargan was hired by J. Jonah Jameson to discover how Peter Parker gets such good picture of Spider-Man, but was later entered into an experimental procedure where he gets the characteristics of some kind of animal. And in Mac’s case, it was a scorpion. Scorpion had amazing strength, could stick to stuff, and that suit gave him some great perks, but Mac was a moron and Spidey was always able to outsmart the lummox. That’s a shade of green that cannot be ignored, and the direct ripoff of Spidey’s powers makes Scorpion a villain that I always enjoyed seeing get his ass handed to him.

This is a relatively new villain to the Spidey-verse is kind of a ripoff of Kingpin Wilson Fisk, but there’s enough of a twist that it gives the character a standalone quality all his own. Martin Li may seem like a good intentioned philanthropist, but he’s secretly the head of Chinatown organized crime syndicate. Yeah, that old bag. He didn’t hang around very long, but he was an integral part in a lot Peter’s renewed family struggles of late, but his Superior replacements hasn’t had to deal with good old Negative. And with a name like that, I couldn’t help but give him a spot on this Lot.

The Russian muscle with the super strong polymer suit, Aleksei Sytsevich was just a poor immigrant trying to make his way. Rhino may have been just a lumbering hulk of a beast in the early days of Spider-Man, but later in the series Rhino became an emotional torn character with a ton of heart that readers could really relate with. Forgiveness aside, Rhino remains one of the greatest Spidey villains of all time. Yes, he only really had one move – run straight ahead – but he did it so well. Spidey saw it coming just about every time, though, and Rhino always ended up serving time behind bars…and then escaping…repeat… 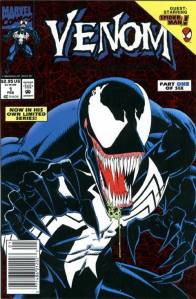 Arguably the most recognizable of all of Spidey’s foes, the alien symbiote known as Venom famously began his life in Marvel Comics as a really big help to Spider-Man. Spidey first acquired the symbiote in the Secret Wars, and he loved it! Great fit, sleek color, and great enhancements, including an endless supply of webbing, what wasn’t to love? Little did Mr. Parker know that the alien was making him *pinky to cheek* eeeevvviill! He eventually rid himself of the black goo, but all kind of folks have donned the symbiote since to varying degrees of strangeness. Eddie Brock is, of course, the most famous of the human half of the beast known as Venom, but one time Scorpion Mac Gargan also wore the black monster suit, before Venom got nerfed with Flash Thompson waring the thing. It’s not the the new Flash/Venom is bad, but I like my Venom a whole lot more villainous, and Flash is anything but. Still, Venom represents in this list, and he’s earned the next to the Top spot o’ this Lot. Leaving the one, the only…

Was there ever really any doubt? No other Spidey villain could have possibly filled out this

list, and that includes every single member of the team in the Honorable Mention slot. Norman Osbourne takes super-hero potion, becomes insane, tries to take over New York as a criminal warlord. But, as always, Spider-Man foils Gob’s plot, and this sets into motion one of the most exciting and recognized superhero rivalries in all of popular culture. He was the first to figure out Spidey’s true identify, he was the mastermind of the Clone Saga, and he killed Gwen Stacy, Peter first and one true love (Ouch! It still hurts). Good old Gob’s continues to do his work in other parts of the Marvel U throughout his storied history, but nothing will ever top being Spider-Man’s number 1 nemesis. Green Goblin makes the top, because that’s exactly wear he belongs.