Maelstrom’s long, twisting adventure tale is finally nearing its conclusion as Arthur finally travels through the titular Maelstrom and has a family reunion with his mother. Unfortunately, that reunion doesn’t quite go as Aquaman planned. Oh, and there is a volcano god too because why wouldn’t there be. Don’t question the logic, just enjoy the fun.

END_OF_DOCUMENT_TOKEN_TO_BE_REPLACED 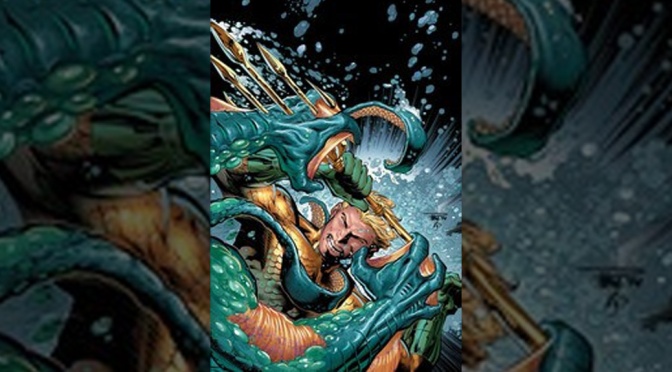 The Chimera strikes! Aquaman is in trouble as he is being attacked by the very sea creatures he has sworn to protect. Elsewhere, Mera continues to deal with the rebel Atlantians. This issue isn’t as action packed as it sounds and mainly serves as an in depth introduction to the Chimera. There are some interesting ideas floating around in here… if you can get past some of the stilted dialogue.

The Chimera has the potential to be a really interesting villain. More panel time is concerned with the Chimera than Aquaman this month and the Chimera has an interesting back story. The fact that it has a better connection to sea life, thus has better control over them than Aquaman is great. Parker really should tap into the Chimera’s dual nature of being both man and Karaqan more in future issues. Paul Pelletier, as always, is great when he does the pencil work in this book. The opening splash page with Aquaman being attacked by all the sea life is simply brilliant stuff. All the weird Atlantis stuff is always really interesting to look at, like the massive turtles that they use as basically chariots.

Man, there seemed to be a lot of exposition about things in this title that we already know about. Its very awkwardly placed here and makes some of the dialogue feel very stilted. I also have a fear that there may be too many things going on at the same time in the story. I’ve liked the tale that Jeff Parker has been weaving here, but it would be nice if a few of the plot threads would resolve.

Aquaman, like so many other DC titles, has the potential for greatness. There are a lot of interesting ideas floating around in this book, but there just seems to be something missing that ties it all together. Once Jeff Parker can find what it is then this book will be one of the best on the stands. Right now, though, its just ok.

When The New 52 revamp over at DC Comics launched a couple of years ago there were plenty of great creators put on specific titles that made for quite intriguing match-ups. Azzarello on Wonder Woman, Grant Morrison on Action Comics, and the trend of putting creators most known for being artists on writing jobs; Manapul and Buccalleto on The Flash, Tony S.Daniel on Detective Comics, among others. Yeah, there were a lot of interesting combinations of creators and books with the First Wave, but none were as interesting as Geoff Johns taking on Aquaman. The combo however wasn’t intriguing because of how great or different it was, it was interesting because maybe, just maybe, putting THE writer at DC Comics on one of the most uninteresting DC characters of all-time will make Aquaman cool again. While these were high hopes, and it was just as likely that Geoff Johns would blow it, Aquaman quickly became one of the best books DC was putting out, taking the character, and the title, in directions that breathed new life (through the gills most likely) into a character that truly needed it.

Before I get into things, we must accept two important facts about Aquaman as a character and a comic book. First off, Aquaman as a character had become a laughing stock. There were a lot of things that happened to this character over his long history that simply ruined him. Mullet; Hook-hand; wasn’t there an eye patch for awhile? Either way, Aquaman was bad, and was arguably the greatest benefactor of the whole New 52 revamp. Second, and perhaps less important, is the fact that some of Aquaman’s New 52 appeal was formed in John’s other title Justice League, which doesn’t do anything to hurt the character, but brings the Aquaman comic down a rung or two. With that said, however, Aquaman as a comic book gave readers the whole package. Johns interweaves existing origin story, with seamless retcons, to tell an amazingly detailed story about love, a lost kingdom, re

venge (on several levels), and a fresh twist on the tried and true Aquaman story of a King torn between his world and his adopted one. While Johns adds all kinds of new concepts, like The Others, and The Trench, in arcs that seem unlikely to cross into each other in any meaningful way, his entire run culminates in an epic payoff for readers. Everything was brought together in such smooth style, with everything coming together so well, the final product is a gift for comic fans. Ivan Reis’ work early on in the title was a great fit of artistic style for the character, and Paul Pelletier provided a nice transition later on in the run. Overall, Aquaman is a terrific comic book, and provided a much needed resurgence for a character that was more punchline than punch.

Honestly, there was very little bad going on in this book. Johns carries the character through two years worth of issues in very strong fashion. However, there were several issues along the way that were in no way necessary for the overall enjoyment of the run. Many of the arcs should have been an issue, or even two, shorter in some areas, and while this is pretty much the way Geoff Johns writes all of his books, it was quite noticeably a black mark on an otherwise pristine title. Although Johns gives a lot of attention to the new things he brought to the title, there were aspects that begged for more attention. The Others, Mera’s relationship with the hero, and the Kingdoms of Atlantis all needed further attention, and I felt robbed, cheated even, that I didn’t get more of that. I know, they need ammo for whatever comes after Johns’ run, but I want my cake AND a fork. When you boil down this story, it’s the same old overused “King regaining his throne through a personal journey of growth” and it’s a bit reminiscent of so many other comics I’ve read.

If you know anything about the history of Aquaman you know just how badly this character needed a makeover. But nothing could have prepared me for just how pretty he came out the other side of that transformation. Geoff Johns has done the unthinkable: He not only made Aquaman a title worth reading, but he made the character one of the premiere characters in DC Comics’ entire stock of heroes. While pre-New 52 Aquaman wasn’t even worthy of his own title, this new version is certainly and finally worth his membership as a core member of the Justice League, as it should be. Not only did Aquaman make the character cool again, but it did so in epic fashion, bringing us new, intriguing characters, like The Others, shedding new light on old characters, like Mera and Atlantis, and even taking the title to Event-status, with the JL tie-in event Throne of Atlantis crossover. Some of the best writing DC’s New 52 has had to offer to this point, and giving new life to a dying character, Aquaman is a great read. Do yourself a favor and give the first trade a try, but be warned, the overall delivery of the story is not a new one, and may come off as derivative. I’m about 90% sure everyone would enjoy this two year run, but that 10% should wade into the water a bit more slowly.