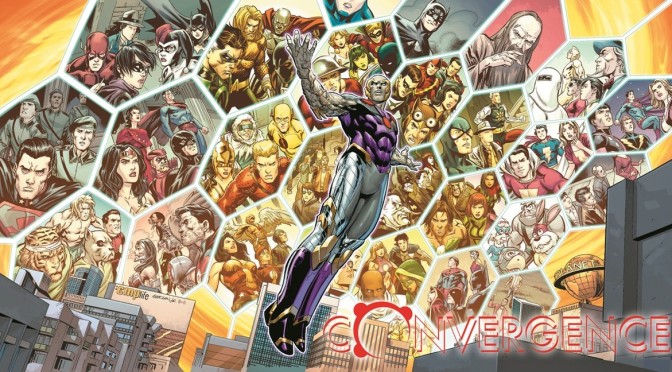 It is kind of hard to believe but April is already here and that means DC’s big universe shattering event Convergence is upon us. I know many comic fans, myself included, are very skeptical about this event and for good reason. Does DC really need another Crisis style event so soon after establishing the New 52? I can’t remember the last time I actually read anything from Dan Jurgens that was actually good. Why is a total newcomer like Jeff King writing a major event like this? All of these things really don’t give many readers much confidence going in to this event. Never fear, though. I hashed out the $4.99 this week so I will give you the low down on whether or not this is actually worth your time or whether you should save some money for two months.

END_OF_DOCUMENT_TOKEN_TO_BE_REPLACED

After three long months, finally the Uprising crossover event comes to its conclusion here in this issue with surprisingly personal results for John Stewart. Now if only this issue was easy to talk about without slipping into spoiler territory…

I have said it before and I will say it again, Green Lantern Corp is a way better book than its companion title, Green Lantern. Whereas Green Lantern is more concerned with great epic conflicts and the tough decisions regarding leadership, Green Lantern Corp is actually about characters and their personal journeys. Never has this been more evident than now as the last issue of Green Lantern was just one big battle, but this issue of GL Corp is about that battle’s fallout as it pertains to Stewart and his relationship with Fatality. Some readers may not like the twist that occurs in this issue, but I did. It solidly progressed Stewart and set the stage for the next story line. Von Daggle and Mogo also had a big moment in this issue that progresses both of their stories immensely. I also love Chang’s artwork in this book. His somewhat cartoony pencils match Maiolo’s bright and vibrant colors perfectly to make a wonderful viewing experience.

There is some clunky dialogue in this issue. Yeah, I know they had to explain the big twist, but the twist wasn’t that complicated so the explanation didn’t have to read like it was coming from a robot. I also am unsure about the new villains that were revealed at the end. I know I’ve only seen one page of them and it is way to early to judge, but I already feel like we are going to be seeing more or less the same things we have been seeing for a while in the Lantern franchise. I just want something a little different.

This was a really good issue in my opinion. It doesn’t completely wash away the bad taste that Uprising as a whole has put in my mouth, but it was still really good. The art was great as usual as well as the story, even though it did suffer from some bad dialogue.

Well, that escalated quickly. Green Arrow is back in Seattle for five minutes and already a team of assassins want to kill him, an old colleague is kidnapped, and his long lost sister pops in wanting to be his partner. Ollie will figure something out… I think.

It is so great to see these old villains again. Its been such a long time since I’ve seen anything with Killer Moth, Dart, or Brick in it and they do not disappoint here as the assassins that Richard Dragon has sent after Green Arrow. Another thing that doesn’t disappoint is the look back into the past relationship of Diggle and Ollie. I’m not going to lie, I was extremely skeptical when I heard that Diggle from the Arrow TV show  was going to show up in the comic. Oh man, are those fears put to bed. The dissolution of the Diggle- Green Arrow partnership is one of the more interesting stories to come out this week and is a real highlight in this book. It adds a depth to the Green Arrow timeline in the New 52 that wasn’t there before. There was also a nice callback to the zero year tie-in issue here that was really nice to see too.

I really love Andrea Sorrentino’s art, so that is a plus to me, but I know the art can be divisive for others. Other than that, this book is pretty great. It might fall into the problem eventually of just making everything too dire and sucking all the fun out of the proceedings, but right now Lemire has hit a comfortable middle ground.