News is still coming from Marvel’s special media event, and with all of the new titles being announced we did get some word on castings for all these movies, namely, who will be our Black Panther. We also got a look at costume designs for the character.

END_OF_DOCUMENT_TOKEN_TO_BE_REPLACED 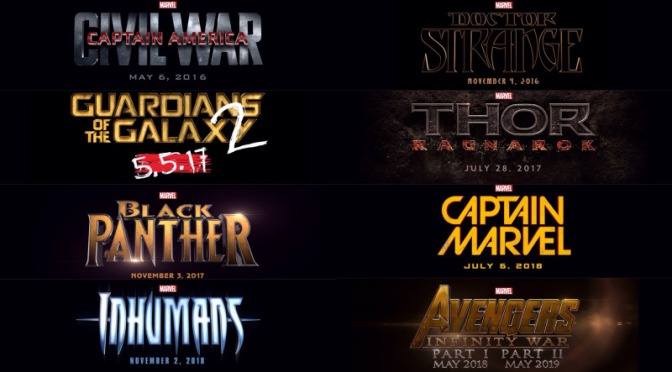 Marvel threw a whole lot at us in only an hour long event, but we’re trying to keep up. Here’s some logo art for everything announced today.

END_OF_DOCUMENT_TOKEN_TO_BE_REPLACED

CBR is reporting that at today’s Marvel Studios Mystery Event that a Black Panther film is on the way, as well as a 3rd film in the Thor franchise.

END_OF_DOCUMENT_TOKEN_TO_BE_REPLACED

Hello, Geeks, and welcome to a very special installment of Outright

Geekery’s Top o’ the Lot. I say it’s special because I’ve decided to get back to the spirit of what Top o’ the Lot was originally conceived to be, namely, the completely weird, slanted, and biased rundown of some trivially specific and arbitrary list of geek goodness. So, I’ve decided to do a series of comic book lists all revolving around characters and color, and what better way to spotlight all of the colors of the rainbow, and kill a Roy G. Biv’s worth of ToLs in a single day, then running down the colors in order? But just because we’re out of the rainbow doesn’t mean were done with the series. Oh, no! So, without further ado, we go monochrome, cut some great picks, and just have to add an extra one, in Outright Geekery’s Top o’ the Lot Comic Book Characters by Color: Black! END_OF_DOCUMENT_TOKEN_TO_BE_REPLACED

I’m having trouble understanding Marvel’s latest event Original Sin. The summer blockbuster of a comic book event began with an overpriced #0 issue that seemed to be nothing more than a primer giving information about the very character that Marvel told us was going to be murdered in issue #1 of the event. Then issue #1, beyond setting up that plot-line of the overall story, established layers of mystery within the title that involved a shadowy character assembling small teams of heroes set forth on unknown missions. It was a fun and exciting departure from what was solicited as something that seemed like a traditional mystery story. While issue #2 picked up right where issue #1 left off, the radical shift in the mystery story seems to be taking the title in more traditional superhero directions, and it was an unwelcome surprise.

The two most compelling aspects of Jason Aaron’s story – the mysterious and random team-up missions of several of Marvel’s heroes, and the overall mystery of Who Killed The Watcher? – are still at the focus of this issue. Seeing teams like Ant-Man, Emma Frost, and Black Panther, and Dr. Strange and The Punisher are just a whole lot of fun to see, and those elements of the overall story really help fuel the murder mystery in truly entertaining ways. Nick Fury’s chase scene with the rampaging Mindless One was exciting, albeit a bit over-the-top. Mike Deodato’s skill with character art really stands out in this issue full of just about every Marvel hero imaginable, but the culminating last page reveal really puts a question mark on what the hell this event is going to be.

According to the solicits of this event, Original Sin promised to be all about the mystery of “Who Killed The Watcher?”, but the reveal of the Orb – the long-time Ghost Rider villain – as the holder of The Watcher’s eye and the assumed murderer in question throws all of that into a state of limbo. There’s certainly nothing cementing The Orb as the murderer, but the quick move the event took to alluding to this Z-List character as the event villain du jour is off-putting to say the least. Meanwhile, the crazy cool team-ups that drove issue #1’s success were put on the back burner in favor of this new and kind of awkward departure.

Original Sin #2 was by no means a bad book, but it took a direction away from issue #1 that was unexpected in a way that leaves the reader wondering just where the event is going from here. I’m sure Aaron has a plan in place for the rest of the event, but this unsureness encompassing the overarching tone of the title, ie. the mystery, leaves a question in the reader’s mind about just how much footing the event has. A slow, clunky start is not the way to sell an event early-on in the process, and it seems like a ton of the potential this title had in issue one was quickly taken away by the end of issue #2. Sure, Aaron can do away with all that within the first two pages of issue #3, but then what the hell was the point of this issue #2? Murder mysteries require there to be questions needing answers, but this event has way too many questions about the plot, and not enough supporting the plot.

Love and marriage. Love and marriage! They go together like a horse and carriage. This I tell ya, brother, you can’t have one without the other. Well, obviously, anyone who has seen an Alex Ross cover knows that you can have love without marriage, and who’s going to attend a ceremony where I kiss a comic book cover? Weddings are always huge events, whether they are real or in the pages of a comic, and Marvel Comics has, for the most part, done it up right over the past few decades. There’s the occasional Marvel wedding that seems to just happen out of nowhere, and love just isn’t that easy; love is a battlefield. So, because I always cry at weddings and because my anniversary was Saturday, we present Outright Geekery’s Top o’ the Lot: Marvel Comics Weddings. 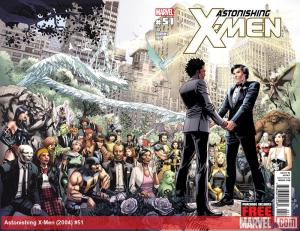 While it barely makes the Lot at all due to it feeling like a forced attempt to take advantage of a timely piece of popular news, in hindsight, Astonishing X-Men #51 turned out to be a purely Marvel-esque attempt to translate real-world issues onto the comic book page, but it still seemed forced. The relationship didn’t have nearly enough time to build and get readers interested, but the absolute history-making ceremony still beat out Luke Cage and Jessica Jones’ terrible excuse for a wedding build-up. And just like the Cages, Jean-Paul and Kyle’s story went pretty much nowhere, leaving an otherwise important event just making this Top o’ Lot.

Weddings can sometimes bring estranged relatives together in an environment of love, and encourage them to put aside petty differences for the sake of the marrying couple. Well, no one told Captain America and Ironman about ANY of that, and the frenemies just couldn’t get over their differences on the Super Human Registration Act and the ensuing Marvel Civil War. Actually labeled with the Civil War Cease-Fire moniker across the top, Black Panther #18 finally saw the King of Wakanda marry his queen, The Weather Witch herself, Storm. The build-up could have been a bit better, but the post-honeymoon drama between T’Challa and Ororo was great as work and cultural differences strained the couple’s marriage to the point of an outright split-up. Civil War may have ruined the ceremony itself, but the marriage felt real, putting the wedding of Black Panther and Storm into the Lot.

In the pages of X-Men Volume 2 #30 it finally happened. The moment X-Fans had been waiting years to see: The wedding of Jean Grey. Although it was that jerk Scott Summers and not Logan slipping the ring onto Jean’s finger, this wedding was the cap on a relationship that had persisted for decades. The ups and downs we got before the marriage were only the beginning of the drama as, even to this very day, we see Scott and Jean deal with a sordid past full of numerous deaths, even more returns from death, and a certain white-clad psychic. Scott and Jean are the couple that was destined to never be together, and that desperate tale lands their wedding in the four spot in the Top o’ the Lot.

“THE WEDDING!” Well, that’s how it was solicited in 1987’s Amazing Spider-Man Giant-Sized Annual anyways, and it so worked for quite a long time. The issue itself was just, plain old good Spidey, with both Peter and Mary Jane showing late to the ceremony, but the strain that Spider-Man put on the relationship as the “third spouse” was played up quite well in a ton of great stories. This is actually my favorite wedding and marriage from the Marvel U, and only one thing ruins it: One More Day. The worst Spidey event in recent memory aside, the Parkers were awesome, and their wedding walks down the aisle to the center o’ the Lot.

2.  Mr. Fantastic and the Invisible Woman

knows that! Marriage is synonymous with family, so it should come as no surprise that Reed and Sue’s nuptials, and their sealing the deal on establishing Comics’ First Family, is so high on the list. Marriage and family just isn’t a device used to make the Fantastic Four an interesting book, it is THE main focus in the best FF tales of its long and celebrated history. The only reason Reed and Sue sit in the number two spot in the Top o’ the Lot is plain old lack of excitement.

1. The Vision and Scarlet Witch

Oh, is it excitement you want?! Well, it don’t get more exciting than a mad-sorceress and sentient robot deciding to tie the knot. And, man, did it get crazy?! Memory-loss, children, West Coast, East Coast, estrangement, and, of course, the outright insanity of Avengers: Disassembled, The House of M and M-Day! Exciting relationships are the best relationships…at least for the readers, anyway. A little spice in any marriage is great, but The Vision and Wanda take it to all new levels, and who knows? The Vision back in Avengers A.I. and Wanda over in Uncanny Avengers could see some cross-over by the long-time star-crossed lovers. Either way, it was a wedding for the ages that led to amazing stuff, and that’s why The Vision and The Scarlet Witch catch the bouquet and make the top spot in the Top o’ the Lot.