Now that Sony and Marvel have found their new Peter Parker in Tom Holland and booked Jon Watts to direct the reboot, it’s time to start filling out the rest of Spider-Man’s world. END_OF_DOCUMENT_TOKEN_TO_BE_REPLACED

Hello, Geeks, and welcome to our latest installment of Comics You Should Have Read By Now. For those of you joining us for the first time, we make it our mission with this article to highlight the best works that the industry has to offer. But while this sounds pretty straightforward, it is somewhat tricky to quantify, as different things can be the “best works” for entirely different reasons. Things can be good for thought-provoking stories, or for beautiful artwork, or for a profound message. Sometimes, a comic can move you with ingenious storytelling that pushes the limits of the medium. Today’s selection, though, manages to do something entirely different: it represents what I think think to be the greatest fan book to ever grace comic shops.  That’s because today we’ll be taking a look at the most epic comic crossover of all time, JLA/Avengers.

END_OF_DOCUMENT_TOKEN_TO_BE_REPLACED

Everything Ends. The haunting phrase Jonathan Hickman has been trying to get me to wrap my head around since his Avengers run started in 2012. The Multiverse is collapsing. The Beyonders have found existence to be a waste of an experiment. There are only two universes remaining: Earth 616 and Earth 1610. The Marvel Universe and the Ultimate Universe. This is it. The Legendary Heroes of the 616 going toe to toe with the honest husks left of the Ultimate Universe. Prepare for what’s to come. Prepare for the Real Secret Wars. END_OF_DOCUMENT_TOKEN_TO_BE_REPLACED

Man, the time can really fly by on you sometimes, can’t it? It’s hard to believe that it’s already been 3 years since the biggest super hero movie of all time, The Avengers. A groundbreaking feat, the big-screen adaptation of Marvel’s premier super team combined together multiple multi-million dollar franchises to bring several beloved comic book icons to life on the big screen. And it was actually good. Such an accomplishment is one that would have seemed impossible to most fans a decade ago, and the fact that they pulled it off led to some highly deserved accolades. But the world moves on, Marvel Studios moved on with it to Phase Two. The inevitable sequel to The Avengers would have to try to be bigger and bolder than even the mighty original, which brings us to the present and the newly released Avengers: Age of Ultron. And while there are some challenges that cause the film to stumble in some areas, the overall package is indeed one hell of an impressive movie.

The action, as you probably know, centers around the MCU’s biggest heroes squaring off against Ultron, an AI experiment gone horribly wrong. Along the way, they pick up new enemies and allies, and we gain more tidbits about the grand scheme of things with the Infinity Stones being moved around. With this as our backdrop, we are taken a wild ride from start to finish. Make no mistake; Age of Ultron is unabashedly a popcorn movie. Not that there’s anything wrong with that, but know going in that you won’t find a lot of deep-thinking moments, even relative to other MCU movies like Winter Soldier. With the return of both the actors and director Joss Whedon, it should come as no surprise that AoU brings a similar tone and atmosphere as the original, combining large action set pieces with dialogue-heavy character interaction. Thankfully, Whedon is a master of both, with fight scenes that drip with fan-pleasing glee and snappy dialogue that has become the director’s trademark, made all the better by a talented cast that has become very comfortable with their respective roles.

As we have come to expect, all of our returning actors give great performances. Robert Downey Jr gives us Tony Stark’s affable arrogance, Chris Evans strongly portrays Cap as righteous but melancholy, and Mark Ruffalo brings both Banner’s charm and the Hulk’s rage to life masterfully. And after having to sit out most of the original, Jeremy Renner’s Hawkeye steps up to deliver some of my favorite moments from the whole movie. This being a sequel, though, there is also an array of new characters on display. Among these, James Spader’s Ultron in particular is outstanding. Equal parts disarmingly fascinating and morbidly insane, Ultron is just as mesmerizing as he is menacing. Another villain worth mentioning is Andy Serkis’s Klaw, who was memorable in his brief appearance, and who has me looking forward to seeing more.

On the heroic side of things, Quicksilver and Scarlet Witch are both on the scene, portrayed by Aaron Taylor-Johnson and Elizabeth Olsen respectively. Other than some…distracting Eastern European accents, the pair do a good job bringing the characters to life, giving the twins emotional chips on their shoulders that play well into their role in the story. For me, though, the best new addition to the good guys’ bench is Paul Bettany as the Vision. After providing the voice for our favorite virtual butler for so long, it’s impressive to see Bettany transition so  well to having more physical presence. The character has a compelling mystique to him, a product of both writing and performance. His reveal in Age of Ultron is in many ways similar to the Hulk’s from the original: lots of build-up for a showstopper at the end. 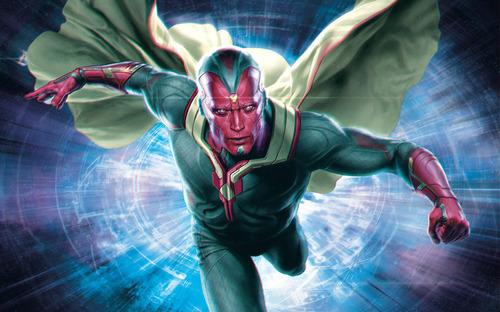 So the acting is strong across the board, but how do things stack up in the story department? For the most part, pretty well. The characters all have clear motives and events flow naturally from cause to effect. The story switches back and forth from over-the-top action and fight scenes (Hulk vs Hulkbuster is everything you dreamed it would be) to small character moments to flesh out our heroes. Yet while these moments are well executed, they also illustrate the film’s biggest pitfall: it is extremely crowded. What moments there are were put together well, but there are several characters (the Maximoffs and Thor chief among them) that don’t get fleshed out quite as much as you would want. I suppose that this problem is one we should have expected; we all knew the cast was comprised of a small army. Considering that, Whedon and company did as well as people could have reasonably hoped, but the dense cast is still a noticeable problem.

Other than this, all of my other complaints are of the nit-picky variety. The CG in some scenes is surprisingly hokey looking, it is somewhat unclear to me just what exactly the movie’s version of the Vision is capable of, and there are some scenes where our more powerful members are conspicuously absent (Thor going on his spirit walk, for instance), presumably to keep the villain from being defeated before the finale.  And while I didn’t mind so much, some comic fans might take issue with some fairly drastic changes for some of the characters. Really, though, issues like this amount to pinpricks in the side of a battleship: hardly something that is going to sink the project.

Age of Ultron brings together an amazing cast to tell a gigantic story, and is full to bursting with engaging characters, astounding action, and sheer fun. Ultimately, it didn’t knock my socks off like seeing the team together for the first time did in 2012, but I had been waiting for that my whole life without knowing it. And after seeing how awesome Marvel’s tentpole Avengers franchise continues to be, I’m sure it will feel like another lifetime while we wait for Infinity War.

VERDICT: Go see it as soon as you can

Marvel Unlimited is celebrating the release of Marvel’s Avengers: Age of Ultron and offering new and returning subscribers their first month free to prepare for the cinematic event of the summer. For the first month of a Marvel Unlimited monthly subscription, new and returning subscribers will be able to enjoy free access to over 15,000 digital Marvel comics!* END_OF_DOCUMENT_TOKEN_TO_BE_REPLACED

This April, Earth’s Mightiest Heroes assemble from across time and space to take on the greatest threat of our past, present and future! Today, Marvel is pleased to present your new look inside AVENGERS: ULTRON FOREVER #1 – the first chapter in a three-part epic Avengers event! Writer Al Ewing (Captain America & The Mighty Avengers) and legendary artist Alan Davis assemble a new team of Avengers for an epic tale that should not be missed! END_OF_DOCUMENT_TOKEN_TO_BE_REPLACED

Assemble Your Own Avengers With Epic Marvel’s AVENGERS: AGE OF ULTRON Movie Variants!

Originally debuting at Comic-Con International 2014, these epic pieces of theatrical concept art by Ryan Meinerding, Charlie Wen & Andy Park combine to form one stunning image of Earth’s Mightiest Heroes locked in combat against Ultron’s massive army. Coming to eight Marvel comics in the month of April, these covers are just like the Avengers – better when assembled! END_OF_DOCUMENT_TOKEN_TO_BE_REPLACED

This week Marvel has decided to put out a special five dollar .1 issue of the Avengers. Is this a necessary part of Hickman’s great epic? No. Is it worth the five bucks? Most likely not. Is it a good read, though? Actually, it is a really good read, but only if you like introspective thought and character development more than action. END_OF_DOCUMENT_TOKEN_TO_BE_REPLACED

Thats right folks the segment you didn’t even know you missed is back! JulesTrue is back in action folks and I’m here to bring you the goods! As we all know Earth’s Mightiest Heroes has quite the roster, and you may not know everyone who’s filled that roster. Well thankfully I do! From East Coast to West Coast. From Secret to Uncanny. I’ll be bringing them to you every week right here on OUTRIGHT GEEKERY!

This week we are going back to the early days of the additions to the roster. This Avenger has been a long standing fave of mine and many will agree a total bad@$$ in his own right. One of the few remaining heroes on the Avengers who doesn’t even have powers. And what else is crazy is he started his career as a villain. That’s right folks this weeks Avenger is everyone’s favorite purple Archer, the guy that has punched Cap and Ironman in the face more than any other hero!