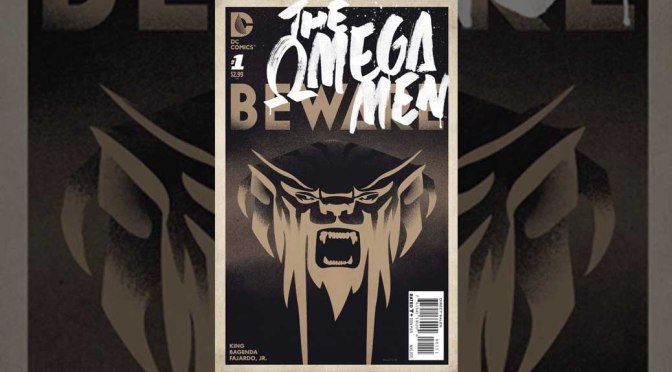 “We will not hurt you. We are friends.”

Convergence is finally over and that means DC is pumping out a whole bunch of new #1s and The Omega Men instantly propelled itself up to the top of my DC pull list. The concept of space terrorists/ freedom fighters who may or may not have killed Kyle Rayner, the Green Lantern I grew up reading, was just too much to ignore. So is The Omega Men #1 a knock out of the park breakthrough title, total crap, or something else altogether? I’ll tell you one thing, it definitely wasn’t what I was expecting.

First and foremost, it is really nice to see DC branch out and try different things. The Omega Men is not your typical comic and if you aren’t willing to give it time and figure things out for yourself, then you will hate it. I, myself, had to read this issue a couple times and if you actually give this book a chance then it will surprise you. Tom King’s story jumps right into the middle of The Omega Men’s conflict with the Viceroy with almost no introduction. Here, King opts to show, not tell the reader his story and cast. Most of the dialogue in this issue is untranslated alien speak and what is not is basically just that quote at the beginning of the review being repeated over and over. While that sounds like it can be confusing, King actually manages to put together a very intelligent story. You are introduced to all of the major characters, learn a great deal about all of them, and relate to their cause all with little or no dialogue to guide you. It is pretty impressive stuff. Definitely not for everyone, but still impressive.

Now that the controversial story stuff is out of the way, let’s talk about something we can all agree about. Bagenda’s art in this issue is amazing. Because of how King’s story is laid out, Bagenda had to do the lion’s share of the work and he delivers in a big way. All of the character designs are great, their faces extremely emotive, and those action scenes have a gory beauty to them. Fajardo Jr’s colors only seal the deal here. He has a very bright painting-like style very reminiscent to Manapal’s/ Buccellato’s work on the Flash and Detective Comics. Just gorgeous work all around.

Tom King’s approach to the story can easily be a turn off to most readers. I know when I first read this issue, I had no idea what was going on and it made me incredibly frustrated. That is not a feeling you want your readers to have, but like I said earlier, after multiple re-readings I did find the story to actually a really enjoyable case of the writer showing us the story instead of simply beating it over our heads with exposition. I just fear that most readers will not give this book the chance it deserves because at first glance it appears to be a bunch of nonsense and that would be a shame. There are some interesting things going on in this book and I think it has the potential to be great.

The Omega Men #1 has a great story and great art. Unfortunately, you may have to do some work to truly appreciate what Tom King has done here because this issue is a little light on the dialogue. Nonetheless, you should definite give this book a chance. It isn’t for everyone, but those that do like it will most likely end up loving it.