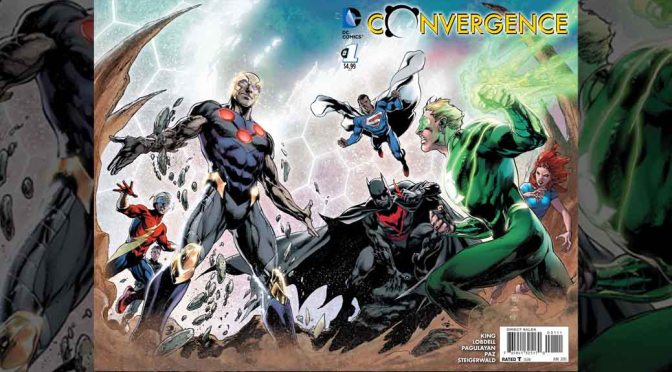 I’m not going to lie. I was not impressed with last week’s Convergence #0. I felt it was too much of an exposition dump and that most of what was going on in that issue did not ultimately matter. Thankfully, now that this event has actually begun in earnest, I can say that it might actually have a chance at being good. This incredibly shocking considering who is all involved in this project, but I actually thought this issue was kind of fun.

I feel a lot better about buying Earth 2: World’s End now. I wouldn’t say that it was a necessary buy to understand what is going on in this issue, but reading it definitely made me more invested than if I was going into this issue blind to the events that occurred in that series. With the exception of a fun little five pages about a city that fails an experiment, this issue is entirely about the Earth 2 crew who decided to stay on Earth and fight Darkseid to the death. Turns out, just before they became fodder for Apokolips, the heroes were teleported to Telos where they must participate in a tournament of sorts, forced to fight against the champions of other realities. The losers of this tournament have their cities destroyed and their realities erased, but the winner get a brand new reality to live in. I really like this idea. Yeah, it is extremely similar to the incursions going on currently in Hickman’s Avengers, but I just really like the idea of all these heroes being force to fight each other to the death. It will be interesting to see who is forced to fight who and better yet, see who rises above the conflict and who is brought down.

The art in this issue is pretty good, which is to be expected with a big event book like this. There are a lot of fun layouts throughout this issue, plus a ton of grandeur. Apparently Telos is the kind of guy that like to take up two page spreads to pose and show off his powers, which is totally fine by me as long as the book looks as good as it does.

There really isn’t much bad with this issue in particular. My problems are still with this event as a whole. While the idea of this multiverse tournament between heroes sounds like it can fun and give us some interesting character moments,  I am still worried. We won’t really know how much this event actually matters until everything is said and done, plus I’m not entirely convinced that the creators will take full advantage of the storytelling possibilities present here. There is a very easy way out for the creators because a good portion of the worlds here are evil. I personally have no desire to see heroes fighting evil versions of themselves. I already saw that in Forever Evil. I want to see the heroes being forced to face other heroes and see whether or not they break and do the unthinkable. Unfortunately, I have a feeling DC will drop the ball. Maybe I am just a negative person, but DC really hasn’t done anything to relieve my fears going into this event.

Convergence #1 is a definite improvement over last week’s zero issue. Though it is really similar to a story going on over at Marvel, the core idea here is interesting, especially if it plays out the way I would like it to. The art is also very good and this issue should be a definite buy for those of you that followed Earth 2: World’s End.

One thought on “Review: Convergence #1”