Month after month, Gillen and McKelvie continue to knock it out of the park with their latest collaboration. With our young protagonist ready to step into a more active role after inheriting the powers of Lucifer (it happened), I’m super excited to see where our adventure leads us next. 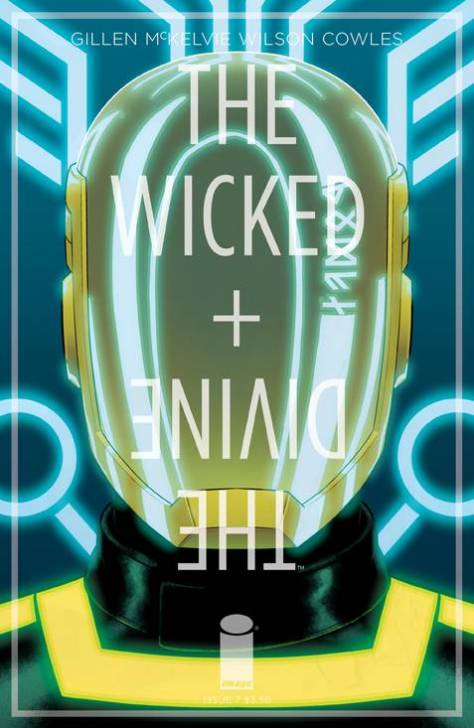 WICKED & DIVINE #7
Publisher: IMAGE COMICS
(WRITER) Kieron Gillen (ARTIST/COVER) Jamie McKelvie
Last year, before The Recurrence, fans gathered from their distant worlds at RAGNAROCK to wonder whether the gods were really about to return or not. Now, as the next RAGNAROCK approaches, everyone knows things are different. What’s more, there are two gods still to emerge. Will anyone there get “lucky?” Look at us whistle, shuffle feet, and avoid eye contact.
Item Code: NOV140697
In Shops: 1/21/2015
SRP: $3.50

Well, the Spider-Verse event is heading into its final issues. After the big revelation in the last issue, I’m really interested to see what going to happen next. The final fight between the Spiders and the Inheritors starts in this issue. This event has overloaded my Spidey-Sense, but I think I can maintain it for a little bit longer.

Tom Taylor has grabbed Iron Man by the horns and returned the unlovable but brilliant Tony Stark to us longtime shellhead readers. If you haven’t dove in to this title yet, my question is why?! Its don’t right spot on for the Iron Man you love to hate. Yildiray Çinar is just wonderful and perfect for the title. It really has the feel of a creative team that is in sync for the kind of story they want to tell. Do yourself a favor and add it to your pull list like I did. 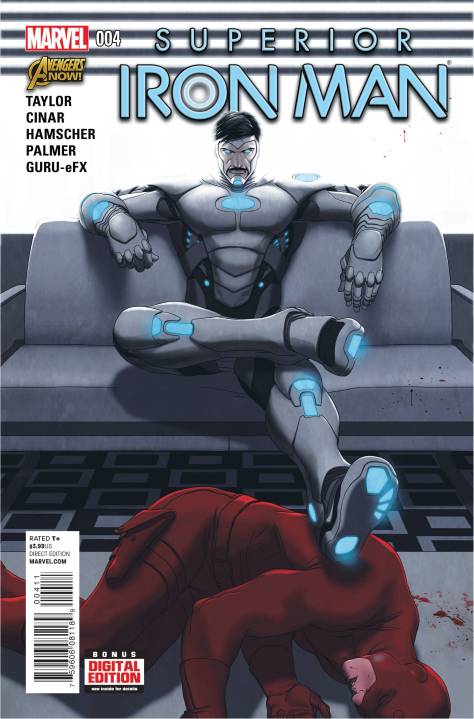 SUPERIOR IRON MAN #4
Publisher: MARVEL COMICS
(WRITER) Tom Taylor (ARTIST) Yildiray Cinar (COVER) Mike Choi
DAREDEVIL ON THE ROCKS!
•  DAREDEVIL discovers the secret to TONY’S success!
•  How far will Tony go to stop MATT MURDOCK from revealing this shocking secret to the world?
•  As Tony’s actions become even more questionable, who will conspire to take him down, leading up to the battle you thought you’d never see?
Rated T+
Item Code: NOV140788
In Shops: 1/21/2015
SRP: $3.99

It’s another week and another new series from Image Comics. Reyn looks to be just another fantasy/adventure comic, but, in the hands of Mercenary Sea scribe Kel Symons, I’m expecting something special. If the high seas adventure translates as well to the fantasy genre Reyn is going to be THE next big thing in fantasy. And I can’t wait to find out.

REYN #1
Publisher: IMAGE COMICS
(WRITER) Kel Symons (ARTIST/COVER) Nathan Stockman
Reyn is a freelance swordsman and monster hunter who also might be the last of the legendary “Wardens” of the land of Fate, whose ranks long since faded into myth. He’s haunted and driven by visions from a “guiding angel” who sets him on the path of a great quest-though Reyn’s hardly the errant knight-type. He’ll rescue and partner with the sorceress Seph, a member of a coven known as the Followers of Tek, hunted as heretics for their beliefs, but who may know what secrets Fate holds.
Item Code: NOV140564
In Shops: 1/21/2015
SRP: $2.99

Sad day for me because this is the final issue of a pretty great series. As a general rule of thumb, I have always avoided the complex, convoluted, and oftentimes nonsensical X-Men franchise, but I took a leap of faith with this book and it was worth it. It was fun while it lasted, I guess.