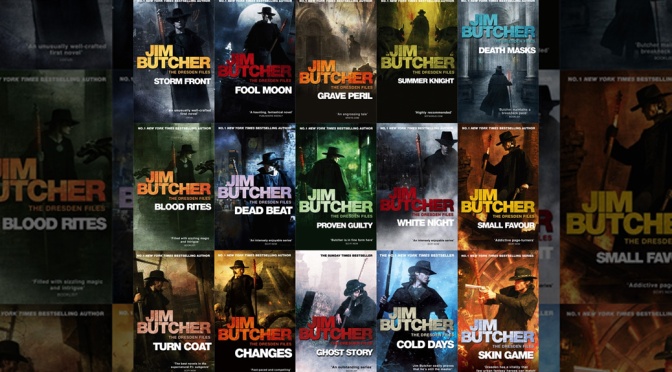 Hello, everybody, and welcome to Outright Geekery. This is Taylor, here today to bring you something new. As regular visitors know by now, we here at OG love all things comic book related, but every now and then, I come across comic books without panels, word balloons, or indeed any kind of artwork at all: just text. “Books,” I think they call them. Turns out, though, that there’s a number of these “books” which just so happen to be right at home here on our geeky site, appealing to our sensibilities even without radioactive spider bites or unbreakable magic lassos. Seems appropriate, then, for us to share these books with you! So that’s what we’re trying to do today: highlight outstanding book series out there that no self-respecting nerd should be without.

For our maiden voyage, we’re going to be taking a look at writer Jim Butcher’s brilliant blending of crime-capers and the paranormal, The Dresden Files. Following the adventures of professional wizard/private investigator Harry Dresden, The Dresden Files takes us for a wild ride through a vast, nuanced setting, and you’ll enjoy every minute of it.

As touched upon above, one of the greatest strengths of the Dresden Files is the way that it cleverly blends the world of the supernatural with gritty crime drama. In general, magic is a difficult element to use in literature, as you run the risk of derailing the story’s tension if you’re not careful in establishing what your characters can and cannot do. How can we fear for our hero’s safety, for instance, if our hero can do whatever he wants with no defined rules? We have no such problems here, though, as Butcher does a brilliant job establishing the limits of what magic can accomplish in Dresden’s world and pitting our hero against credible threats. With these well-thought-out, consistent rules keeping things on the level, Butcher crafts delightful stories about wizards waging wars against vampires, fairies playing dire games with mortal lives, mob bosses employing the warriors of Valhalla, and everything in between.

But even beyond impressive world-building and the overall strength of the setting, Butcher displays a great strength for plotting fun, engaging stories. Every story has a steady rhythm, ratcheting the tension up and down and up again with honed precision, while also shifting back and forth between humor and action, and in fact often pulling off both simultaneously. It’s difficult to describe, but reading through the stories and their larger confrontations reminded me of a particularly well crafted role-playing campaign, where the monsters and obstacles are menacing, the environments intricately laid out, and the solutions clever and exhilarating. (As a bit of an aside, Jim Butcher would just be the best DM. Just saying.) Every book in the series creates thrills and laughs, and does so without becoming stale, as each book brings unique challenges for Harry to overcome, and each has its own, special crowning moment of awesome. At the time of writing, the series is 15 books in and it still has readers coming back for more.

The thing that really makes the series great, though, is the endearing nature of our protagonist. Harry Dresden is, simply stated, awesome. He is at once noble, flawed, hilarious, crafty, and sympathetic. To be honest, he reminds me of Peter Parker in all the right ways: He’s constantly throwing out quips and zingers in even the most dire of circumstances, he uses his wits and intelligence to defeat foes far stronger than he is, and always tries to take all that life throws at him in stride. More than this, though, he is a man with extraordinary ability who is still all too human, with very human failings. This means that sometimes he makes mistakes, but he never lets that stop him from trying to do the right thing, because there are people who need his help, dammit. He’s a man with the power to manipulate the fundamental forces of creation, but whose greatest strength comes from the size of his heart. Harry is a character who you love to root for, whose pain you feel, whose triumphs you’ll relish, and who makes this series the treasure that it is.

On top of all this, you have a vast cast of other engaging, enjoyable characters, including Karrin Murphy, the diminutive badass detective, Bob, the perverted spirit trapped in a human skull, and Michael Carpenter, the devoted husband and father of seven who happens to serve as the Fist of God. And those are just some of the prominent characters I can mention without spoiling anything.

But while anyone can pick up these books and enjoy them, they are especially awesome for those of us on the nerdy side of the spectrum. Why? The references. Oh Hell’s Bells, the references. A minute ago, when I was talking about what a great character Harry is, one awesome thing about him that I failed to mention was that he is a colossal nerd. Consequently, the books are chock full of references to the Incredible Hulk, the X-Men, and especially Star Wars (one of Harry’s most prized possessions is his vintage original Star Wars poster). In his spare time, Harry likes to play DnD with a group of vigilante werewolves (Harry rolls a barbarian). Hell, there’s even a Xenomorph that puts in an appearance at one point. To any lifelong addict to all things pop culture, these books are a godsend, one that will make your inner geek positively giddy.

In conclusion, The Dresden Files series of books makes for a fantastic way to spend your leisure time. They combine thrilling modern fantasy with gripping crime drama, acted out by a great cast of characters. These books have a lot of heart, that elusive element that takes a good story and makes it something special. Harry Dresden will make you laugh and break your heart, and will always leave you wanting more. Also, there’s totally a part where he rides a T-Rex into battle against zombie hordes.

Run out to your local library and give it a try.

So there we have it! What did you think? Be sure to let me know, and thanks for reading!

3 thoughts on “Books Without Panels: The Dresden Files”