Space may be the final frontier but exploring the great black beyond requires more than just a fleet of badass starships; you need a place to park! So it comes as no surprise that Star Trek’s Starfleet full of starships had some killer garages. Yup, the cribs were just as decked out as the whips, and the Federation was living large in the lifeless largeness. So without further ado, we won’t engage Warp Factor 4, because we don’t need no stinkin’ warp engines to be awesome, and delve into the coolest interstellar bases in Outright Geekery’s Top o’ the Lot: UFP Space Sations.

Wait, what did he call it? While they never really use the term “Starbase 1” in the Original Trek flicks, the Abrams movies spell it out fairly nice, but I refuse to make the distinction. Hey, that’s why it’s slanted and biased, right? The starting point for a doomed fleet headed 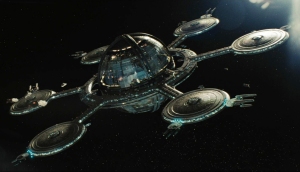 to Vulcan (thank goodness for that E-brake), and some of the best scenes for the original movies, including a blacked-out by a whale-curious probe version, and a fun little race between the Enterprise and a sabotaged Excelsior. If it wasn’t so damned confusing it be a bona fide member of the Top o’ the Lot, but this list is too full of awesome to make room!

Yeah, I know, it’s just a space dock. But space docks are the places where starships are born! They’re the wombs of Starfleet!! And Earth Station McKinley is the premiere space dock of the entire Federation. The Enterprise-D left McKinley Station right after its launch just before heading to Farpoint Station, and underwent major refits at the station after the Borg Incursion of Wolf 359. The USS Voyager launched from McKinley and their first new pictures of Earth were shot from the station courtesy of one Lt. Barclay. It’s a supercool addition to the Lot because it shows off Trek’s use of semi-solid real-world engineering theory in obscenely fantastic ways.

It’s not the favorite installment of Trek, but the Scott Bakula captained offering made great use of this place. Jupiter Station was first established in DS:9 as a scientific research station, most notably, home of Dr. Lewis Zimmerman creator of the Emergency Medical

Hologram, but why put a station way out there when we got all these warpy starships?. That was answered when the Enterprise show threw it into Trek history in an organic way where a layover near Jupiter may have been a necessary thing way back when in the future. Pure adherence to creative history gets Jupiter Station a solid look, while Doc Zimmerman and his madhouse of holographic hilarity put it in the Top o’ the Lot.

Really? That thing?! Yes, really, that thing! I’m not sure what they really did there either but this place was the setting for some pretty cool moments in the scope of TNG. Data laughing like a crazed madman before crying like a hungry baby; Geordi getting all kidnapped and stuff; and Soran destroys a star! I mean, come on! We didn’t see half that cool coming from the stations towards the bottom o’ this Lot. Important and short-lived, but going out with a bang, changes the gravity in this sector just enough to put it in the Lot.

The setting for arguably (Space Seed) the most popular episode of the ToS, The Trouble with Tribbles, K-7 was one of the earliest showings of a Trek space station on the screen, and it did not disappoint. So much so that the DS:9 crew found their own way to K-7 in pursuit of a pesky time-traveling Klingon in disguise, throwing Miles O’Brien forever into the remastered retconned version of The Original Series. Hey, this megafan of the Chief can dream can’t he? But that leaves only one spot left in the Lot! I’ll bet a mug of raktajino you can guess what makes the Top spot.

Are there any surprises here? I don’t think so! The Cardassian built station formerly known as Terok Nor, turned key Federation outpost and first line of defense during the Dominion War, Deep Space 9 was the setting for a show that took what we knew about Star Trek, turned in on its head, shook it up real good, kept what fell out of the pockets, and gave us something completely new and different yet absolutely “Trek” in its overall appeal. I could go on for hours about each and every resident of the station like they were close family, but who’s got the time? The Cardassian defenses and booby traps left over from the occupation, the amazing, never-before-seen in Trek, station defenses, and the promenade! Come on, the Promenade! Who wouldn’t want to stop for lunch at the Klingon Restaurant, buy a shoulder-padded jumpsuit or two at Garak’s, before ending the day with a game of Dom-jot or darts at Quarks? They even recreated the whole damn thing in Vegas, which was ironic, since Las Vegas was actually recreated on a DS9 holosuite, with one Vic Fontaine swooning into the night. Nothing left to say; DS9, Top o’ the Lot.